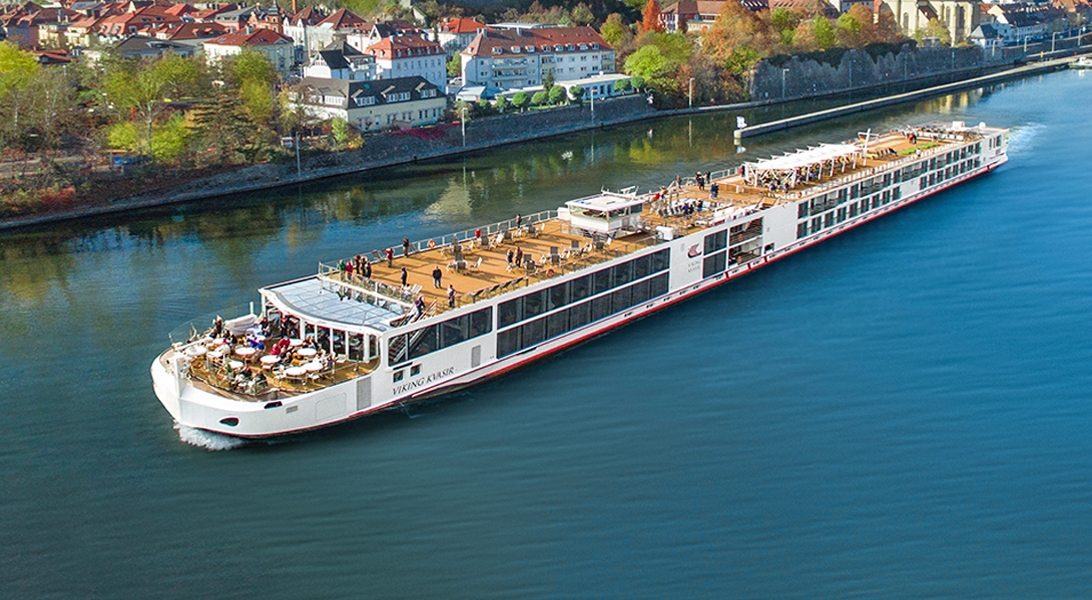 Revolutionary in concept and design, this spacious outdoor seating area at the bow of the ship is perfect for having a casual meal al fresco, meeting friends for drinks or reading a book, all while enjoying breathtaking views and basking in the fresh air.

Gaze at breathtaking scenery through the Restaurant’s panoramic windows as you dine on regional specialties and contemporary cuisine. The atmosphere is casual yet elegant, with high-quality table linens, china, cutlery and glassware at every meal.

Enjoy sunshine and fresh air while you take in 360-degree views of the scenery. Stand at the railings or relax in a comfortable deck chair. Some of the seating has a canopy for those who prefer shade. The sun deck is adjacent to the Sky Bar and there is an access way to the bridge.

Located in the Lounge, the bar is lively and inviting - a gathering place for guests to view the scenery, have a drink and catch up on the day with friends.

Located in the heart of the Upper deck adjacent to the Aquavit Terrace, the library has comfortable seating and excellent reading light. Our ships’ libraries carry approximately 80 books, in various languages but mostly English, and several games such as chess, backgammon and playing cards. Pick up a magazine or board game and enjoy it in the lounge just steps away.

Forget to bring something? Looking for a magazine or some gift items? The onboard boutique on the main deck has everything you need to make your voyage comfortable and convenient.

Enjoy sunshine and fresh air while you take in 360-degree views of the scenery on the walking track.

Einar - Norse Earl of Orkney
A strong warrior, Einar wrested control of the Orkney and Shetland Islands from Danish warlords in the late 9th century after his brother Hallad was unable to hold his ground there. The dynasty that he founded ruled the archipelago until 1470.

From the Program Director and Hotel Manager to restaurant servers and housekeeping, our onboard staff is dedicated to serving you. Gratuities are included on board. Any additional tipping is at your discretion; should you choose to tip your local guides and drivers, we recommend tipping at the end of each tour in cash. We suggest €2 per person, per day for local guides, and €1 per person, per day for drivers. Most restaurants include service in their prices, and it’s customary to round up generously for good service.

It’s been said that the best way to know a culture is through its food and wine. Both engage your senses and provide a window into the traditions and essence of a land. Viking's trained chefs are passionate about food and committed to providing a complete culinary experience. The ships’ dining areas are hospitable and inviting; the service is friendly, attentive and personalised. Menu selections include regional dishes and contemporary cuisine to offer a variety of flavours designed to suit any palate.You have choices for breakfast, lunch and dinner. Not just in food selection, but also in where and how you enjoy them. Greet the morning with a croissant and cappuccino on deck, or begin your day with a sumptuous buffet breakfast. Have a casual lunch or dinner al fresco, or join friends in the restaurant. Open seating allows you to mingle with the same guests every evening or meet someone new each day.

Viking know that you travel to explore, to learn, to understand—to gain more insight and appreciation than can be obtained from simply passing through. Every aspect of your time with Viking, from local cuisine offerings to carefully created enrichment programs, is planned to bring you closer to your destination..

As with your stateroom, the public areas are designed to make the most of the splendid views. Whether from the sun deck, the Panorama Lounge or the restaurant, a river cruise provides uninterrupted sightseeing, from the time the morning mist rises from the water to when the setting sun announces the end to another remarkable day.

There is a walking track on the sun deck.

Due to the nature of Viking cruises, they do not maintain specific facilities or services for children aboard cruise vessels. In the circumstances you and all members of your party must be aged 18 or over on or before the day you are scheduled to embark on the cruise vessel.